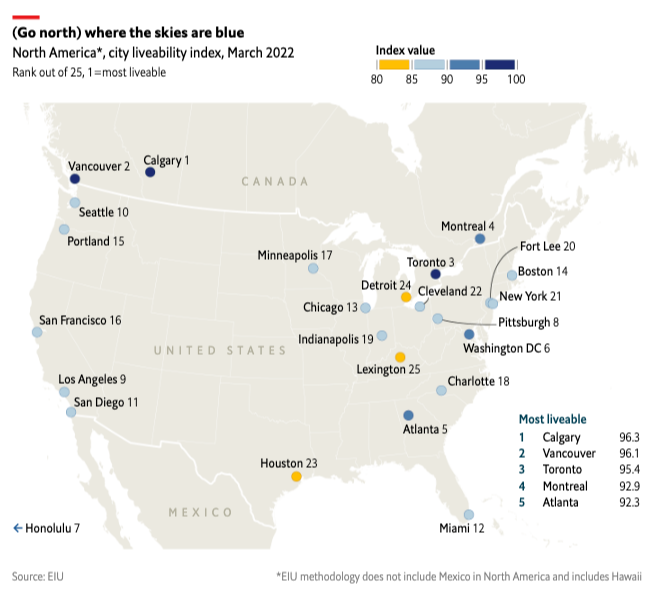 The best places to live in North America

I'm a financial planner serving Orange County and Riverside county.  The Economist just posted a an article that points both Los Angeles and San Diego as some of The best places to live in North America.

Since both Riverside and Orange Counties are smack in between LA and SD, I'm gong to chalk the Coastal Cities and Inland Empire up as a win in the best places to win category.

Interestingly, Opportunity Insights, a massive visual data company, shows the whole are of (most of) Los Angeles, San Diego, Riverside and Orange County as places where young adults who chose not to move from. In fact, 80% of adults chose to stay in the areas they grew up in.

Over 630,000 people moved to North America from other parts of the world in the first half of 2022, a rise of 51% from the same period a year earlier. It is easy to see why. The region is home to some of the world’s most “liveable” cities, according to an index by eiu, our sister company. It ranks living conditions in 172 cities around the world, taking into account more than 30 factors related to education, culture, the environment, health care, infrastructure and stability. This year, every city in North America included in the index scored above 80 (out of 100), with an average of 88. That makes North America the second-most “liveable” region in the world, narrowly behind Western Europe. Which of its cities stood out?

Those looking for a new home may want to consider Calgary. The Canadian city scored 96 points, the most of any North American city in the region. It is not its first time at the top: Calgary has come first in the region twice before in the past decade. Vancouver, Toronto and Montreal filled the next three spots. Residents of all four Canadian cities enjoy top scores for health care and education. Canada’s rollout of covid-19 vaccine boosters and the quick reopening of schools during the pandemic aided its high marks.

The top ranked city in the United States was Atlanta, which came fifth overall. Los Angeles, the region’s biggest climber, rose to ninth place from 15th, thanks to big gains in the culture and environment category after it eased capacity restrictions for venues in February. New York, meanwhile, remained close to the bottom in 21st place—two below its pre-pandemic rank. The city scored poorly on stability and infrastructure (as New Yorkers worried about high crime rates or stuck on an ageing subway will understand). Mexico is not included in EIU’s North American index, but its cities were among the bottom 50 of the global survey. When it comes to liveability, it seems the further north you go the better. ■