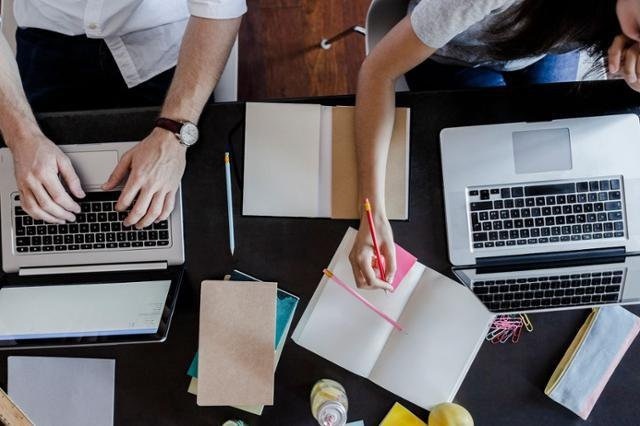 The First Rule of Co-Working With Your Spouse: Don't Yell Out for Toilet Paper

The Wall Street Journal: Julie Jargon
March 23, 2020
Share |
As couples confront the new reality of working in close quarters due to employers' efforts to contain the novel coronavirus, they also have to contend with the added challenge of managing children at home.

Brooke Markevicius was on a Zoom call with a potential business partner last week when the ultimate work-from-home embarrassment happened: Her husband yelled to her for toilet paper.

Ms. Markevicius said her face registered shock for a moment but that no one on the call seemed to notice or hear anything. She was wearing AirPods and quickly shot her husband a text message to say that she was on a call.

Luckily, he had his phone with him in the bathroom. "I stopped right away," said Edgar Markevicius.

Scenes like this are playing out in homes across the country as couples confront the new reality of working in close quarters due to employers' efforts to contain the novel coronavirus. The added challenge of managing children at home due to school closures is throwing households into chaos.

The Markevicius family of Durham, N.C., lost their part-time nanny, a student at the University of North Carolina, when the college said it was switching to remote instruction and she left for home four hours away. Mr. Markevicius, a security engineer at a tech company, already was working remotely, but Ms. Markevicius, founder and chief executive of MOMentum, an online marketplace of goods and services run by moms, was working out of a co-working space until last week. They began taking turns working from a desk in their guest room.

On another day, it was Mr. Markevicius's turn. While his wife was putting their 2-year-old down for a nap, their half-naked 5-year-old daughter walked in on him during a team video call. She began talking to her dad's co-workers. "Luckily my team has lots of dads with kids and everyone laughed," said Mr. Markevicius.

The events led the couple to develop some tech solutions for their new WFH situation: They began sharing a Google calendar so they would know when the other is scheduled to be on calls, as well as using Chore Pad, an app to track the kids' chores, and Timo, an app that helps establish a schedule for kids. They set up various Montessori-style stations in their house so the kids could move around to different activities and decided to lean more on educational apps such as Khan Academy Kids and Endless Alphabet.

They had been remodeling their basement to include an enclosed home office so that Mr. Markevicius would have a better place to work than the guest-room desk. It was nearly completed when they learned that one of their contractors had come into contact with someone who tested positive for coronavirus. The worker had to be tested, too. While they were awaiting his result, they disinfected the office and furnished it themselves. (He turned out to be negative.)

Amy Kaske Berger, who runs her own public relations firm from Northbrook, Ill., has seen numerous sample schedules on social media to help parents create routines for kids who are at home, but said she is trying not to give in to the pressure to keep her 3- and 5-year olds academically stimulated all of the time.

"I decided to give myself more grace than to put together a rigid program I would only feel disappointed by," she said. "I know kids thrive on routine and structure, but I feel like putting too much pressure on moms, especially, right now to keep everything together throughout these difficult days is just too much."

She has put out crafts for her kids and is trying to work during times when her husband, a manager at a pharmaceutical company, is less busy. When they do have to work at the same time, they do so in their home office, which has side-by-side desks. When he is on calls, she can't concentrate, so she busted out her old Bose QuietComfort noise-canceling headphones and started listening to a Spotify station called "Jazz for Study."

"I want to be clear that it's not smooth jazz," she said.

Sometimes her husband needs a break from the home office and pops in his AirPods to take calls outside. "Our office window faces the front of the house and I've seen him walk by on phone calls," she said. "It's funny, because we live in the suburbs, so it's not like every person is out walking and talking."

While they are trying to find ways to work alongside each other and manage their children, they have come to rely on one very big piece of equipment to save their sanity: their Peloton machine.

Ms. Kaske Berger, who was inspired by a friend to get one in December, said the exercise bike has become a source of escape from the new isolation. She and her husband both use it. "It's nice to feel connected to the world, even if it's a recording of a class from October," she said.

Hayley Nivelle, a lawyer who runs her own practice advising startups, lives 10 miles from New Rochelle, N.Y., the site of a significant coronavirus outbreak. She and her husband, who works in finance, decided it was best not to have their nanny come for a while. They began juggling their jobs and their two small children while hunkering down at home. They are tag-teaming the child care along with their work schedules and, like the Berger family, have found an outlet in their Peloton.

"We've decided it's important to get in some exercise," said Ms. Nivelle. "We're giving each other an hour every day."

Because their children are so young—almost 2 and almost 4—one parent has to be supervising them most of the time. "When needed, I'm going to turn to screen time, because that's what keeps their focus," she said, explaining that she likes ABCmouse, the Cosmic Kids and kids' shows on Netflix.

Ms. Nivelle said the complexity of working from home extends far beyond work alone. "It's the child-care responsibilities, making three meals a day at home and cleaning up," she said. "If it was just the two of us working here remotely, sure we might get on each other's nerves, but that sounds like summer camp."

Write to Julie Jargon at julie.jargon@wsj.com