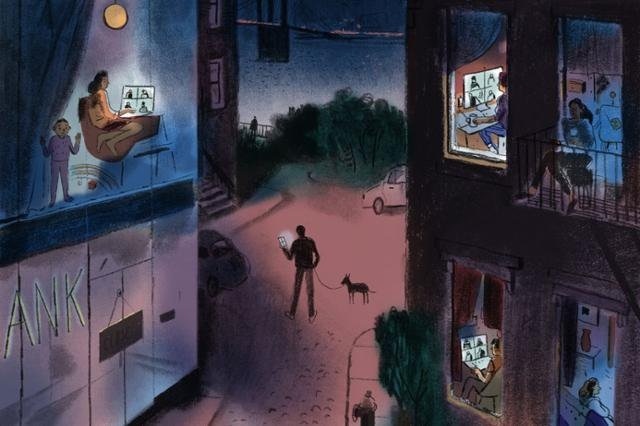 The Office Is Far Away. Can Its Culture Survive?

The Wall Street Journal: Chip Cutter
June 15, 2020
Share |
Bosses fear that if remote working arrangements last much longer that relationships will fray and innovation may suffer.

An online plank-holding contest. Walk-and-talk meetings held outdoors via Zoom. A companywide game show based on Netflix's "Love Is Blind," capped with a virtual dance party.

American companies are experimenting with new ways to replicate the camaraderie that once defined day-to-day life inside an office as a pandemic-induced period of remote work approaches three months—with no clearly-defined end in sight.

Millions of workers have proved they can do their jobs at home for now—sometimes surpassing their productivity in the office. But as more managers come to accept the reality that employees may be apart for a while longer, they are fretting about how they can instill culture and encourage innovation when employees who once spent days together now rarely see each other in person.

"It's the foremost concern," says Daniel Lubetzky, founder and executive chairman of snack-bar maker KIND LLC. "None of us really knows how this movie will play out if it continues like this for much longer."

Another reminder of how difficult it can be to maintain morale remotely came this week as companies looked for new ways to connect with employees reeling from civil unrest and anguish over racial disparities.

In an employee meeting Wednesday, WW International Inc. Chief Executive Officer Mindy Grossman shared her personal perspective on recent events and the company then made time for employees to reflect in silence during a roughly seven-minute guided meditation—all done via a video call, she says. At the Denver nonprofit Uncharted, CEO Banks Benitez broke the organization's employees into breakout groups to share their feelings.

"Obviously, Zoom is not the ideal format for this stuff," he says. "It's where we are."

Some companies trying to keep their staff unified during a period of extended uncertainty are leaning on old methods of corporate communications to build connections. At trash hauler Waste Management Inc., not all employees had email when it sent about 20,000 employees home in March, says Jim Fish, the company's chief executive. So it introduced an internal app in April that linked to brief video messages from Mr. Fish and other top executives. Eyeglass maker Warby Parker doubled the number of all-company town halls, and now holds brief sessions twice a week to keep every employee in the loop, says Neil Blumenthal, a co-founder and co-CEO.

KIND's strategy is to hold two to three virtual water-cooler check-ins a week in which anyone can show up and chat, Mr. Lubetzky says. Many of the firm's 320 employees only stay for about 15 minutes. Teams within the New York-based company also moved interoffice competitions online as well, including a recent challenge to see who could hold a plank the longest. (Avery Tarasov, a senior manager of security engineering and threat operations, was the winner after maintaining a plank for three hours, according to a spokeswoman.)

Even before the pandemic, certain companies in recent years elected to shift many of their employees to remote work, believing that would yield better access to talent, a better culture and more productivity. Even big-company bosses who are new to remote work had prior training at communicating a shared set of values and goals to decentralized offices spread around the world.

Yet there are signs that some employees are losing touch with their company's essence during this period of extended uncertainty. More than half of the 2,050 full-time U.S. workers across many industries who responded to a survey conducted for Prudential Financial Inc. in March and April say they felt less connected to their organizations as remote workers. Prudential Vice Chairman Robert Falzon says at his own company those who worked together on new products before the pandemic seem more in sync than those who only interacted remotely.

He worries about a slow decay in company culture if the remote-working arrangement continues. "This should be keeping leaders up at night," Mr. Falzon says.

Some of the tactics deployed early in the crisis to reassure employees are starting to lose their effectiveness, says Jimmy Etheredge, chief executive officer of Accenture North America. Mr. Etheredge still holds the occasional meeting for 60,000 Accenture employees in North America, but is also encouraging team leads and project managers to do their own regular check-ins with workers so they can quickly solve their own issues. Employees, he says, are "being town-halled to death."

Ellen Kullman, chief executive of 3-D printing startup Carbon, says she fears virtual work setups could eventually lead to a decline in new ideas. She knows employees sometimes come up with new creations following a conversation in a lunch line or a quick catch-up with a colleague outside the building.

"What I worry about the most is innovation," she says. "Innovation is hard to schedule—it's impossible to schedule."

Carbon is known for its collaborations with Ford and Adidas. Many of the company's 500 employees have rallied in recent weeks to ensure the company's 3-D printing technology could make face shields or nasopharyngeal swabs for Covid-19 testing. Some have tried to replicate walk-and-talk meetings by connecting via Zoom while walking near their homes, she says. But to maintain the pace of new inventions, Ms. Kullman says some employees will need to return to offices because only so many ideas can be hatched from afar.

A number of companies say they have been successful in working remotely, in part, because employees already know each other. After years of working alongside one another, many can decipher colleagues' facial expressions on video calls, for instance, or anticipate a co-worker's preferences. Over time, executives worry that new hires who are remote, who have not developed such bonds, may have trouble acclimating, or that an organization's core culture could deteriorate.

Nearly all of the 65 employees at Buoy Health, a startup whose AI-based health assistant was started by doctors and scientists at Harvard University and is used by states and companies as part of Covid-19 screenings, have worked together at offices in Boston and New York. Buoy recently hired four employees remotely, and has five more positions it aims to soon fill.

"What I'm worried about if we have to scale from where we are today to doubling or tripling in size, now you have a majority of people who have never met each other in person," says Andrew Le, the company's chief executive. "Will that cultural debt add up?"

Before the pandemic, Buoy's teams went out for drinks after work. In an attempt to recreate some of those exchanges, employees have organized virtual gatherings to fight against the doldrums of being home all the time under intense work pressure. They include a dedicated Slack channel to discuss "quarantine binges," an online book club, remote trivia tournaments and a companywide game show based around the Netflix reality dating series "Love Is Blind" that ended with a virtual dance party.

Even so, the most difficult conversations at work are still better done in person, Dr. Le says. That could be a performance review or disagreements about the direction of a product. "You kind of need everything at your disposal—whether that be a warm handshake, or a pat on the back after, or multiple expressions of listening and understanding."

Andi Owen, chief executive of furniture giant Herman Miller Inc., says she can't find a substitute for dropping by an employee's desk and asking about his or her children. "That unplanned kind of interaction that contributes so much to how we build relationships with people and how we build culture, those things are what are missing," she says.

Write to Chip Cutter at chip.cutter@wsj.com