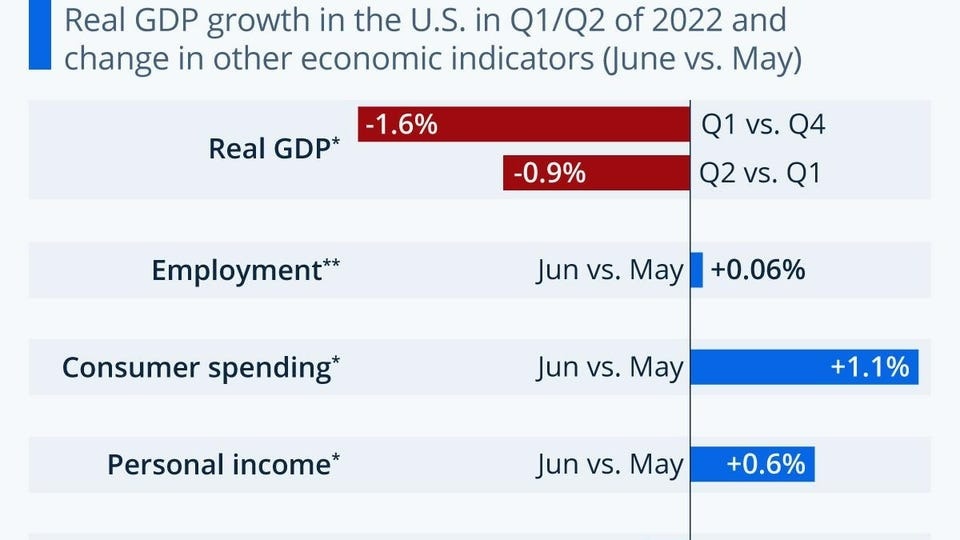 If you would have asked me last year how to define a recission, without hesitation I would have told you "two quarters of negative/or falling GDP".
I'm not alone in this. It isn't farfetched for me to presume everyone would have explained it the same way.
That's how we learned it as an economics major.

On June 6th, I share that the real definition of a recession is a bit more complicated than that. The National Bureau of Economic Research (NBER) technically calls the recession.

In all reality, I consider this a recession.
A mild recession.
But since we got two quarters of negative GDP, -1.4% in Q1 and -0.9% in Q2 it sure seems like a recession started.

But there are some bright sides.
Look at he market in July.
Look at non-farm payroll on the year.
Look at the increase of CPI on a year-over-year basis (I calling for a peak of infatuation too early once before).

All and all, I stay hopeful that Google, Apple, Coca Cola and the entire US Economy are going to continue attempting to create value, and will help grow the economy in the long run.

This article was wrtten by Katharina Buchholz, Contributor at Forbes.

When the U.S. recorded two consecutive quarters of negative growth in Q1 and Q2 of 2022, the Biden administration was quick to point out that while the development constituted a widespread definition of recession, the official classification was indeed a different, less clear-cut one and that the U.S. had in fact not entered a recession officially until the National Bureau of Economic Research said so.

So far, no unsatisfying. But government analysts might have a point when alleging that a recession only happens when there is “a significant decline in economic activity over more than a few months, which is assessed using several indicators, including the labor market, consumer and business spending, industrial production, and incomes.” Contradictory economic data has characterized the current “weird economy”— as one CNN correspondent put it —which isn’t exactly struggling, but also not exactly doing well.

Looking at all of the indicators mentioned above, only one signaled economic decline in June, which is also the last month of the period in which the United States entered what is sometimes called a technical recession of two negative growth quarters.

Industrial production declined, if very slightly, by 0.2% in June compared to May 2022, but that hasn’t been the only (slight) setback in a wider Covid recovery that has been ongoing since the second half of 2020.

Consumers still spend more (or at least not less)

Yet, the indicators that pointed towards expansion also saw only small gains. The slimmest was recorded in employment , which grew by a seasonally adjusted 0.06% in June, causing the unemployment rate to stagnate at a still low 3.6%. Personal income grew slightly by 0.6% on a seasonally adjusted, annualized basis but fell by 0.3% after taxes and inflation. Nevertheless, consumer spending showed the strongest growth at 1.1% (and 0.1% after adjusting for inflation).

But rising prices, which are hammering down on the American public, could still depress consumer spending more, potentially dragging down another indicator. While the economy is not in its direst straights, the outlook certainly isn’t great either and even the mention of a (technical) recession might be enough to tip the scales with timid businesses and consumers. As the combination of inflation and recession is leaving administrators at a loss whether they should stimulate or depress the economy, the global supply shocks of the Ukraine-Russia war that are behind the unusual patterns might ultimately be what prolongs or ends the current crisis.