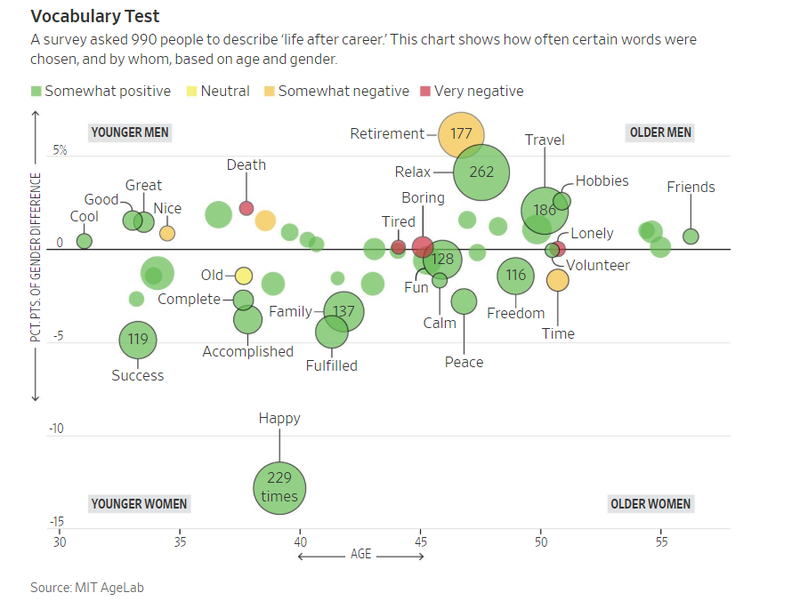 MIT ran a study that found people think of retirement differently.  Which makes sense.  Here is what they found.

The MIT AgeLab was created to "invent new ideas and creatively translate technologies into practical solutions that improve people's health and enable them to “do things” throughout the lifespan".  In a study titled, "The Language of Retirement", MIT researchers asked how American ducts describe what "like after career" would be like.

The most popular words used were:

There's a lot of thought that should go into retirement. "Retirement is likely to be the most expensive item any family will purchase. Yet, unlike anything else in life, it remains an elusive vision rather than a tangible product or experience that can be tasted, worn, driven or lived in."

A deeper dive into the study, if you were interested, was linked to The Journal of Financial Planning:
https://www.onefpa.org/journal/Pages/AUG18-Describing-Life-After-Career-Demographic-Differences-in-the-Language-and-Imagery-of-Retirement.aspx

The Revealing Words People Use to Describe Retirement

To explore how people think about retirement, the MIT AgeLab asked 990 adults across the U.S. to come up with five words describing “life after career.”

Their responses formed the basis of the accompanying word cloud.

The 4,759 answers that people provided consisted of 921 different words in all. Most striking, however: A mere 47 words (those shown in the chart) accounted for more than 60% of all responses. More about that in a moment.

The size of each circle represents how often the enclosed word was proposed, while the color reflects how emotionally positive (green) or negative (red) a word is.

The words are distributed vertically to show their prevalence among male and female participants. Placement along the horizontal axis represents the average age of the people who provided a word; younger to the left, older to the right. The ages of respondents as a whole ranged from 18 to 91.

As to what it all means, the chart suggests that people’s thoughts around life after career are largely positive and optimistic. Some demographic differences were observed. Older respondents were more concrete, and more likely to choose words related to social interactions (e.g., “friends” and “lonely”) and actions (e.g., “travel,” “hobbies” and “volunteer.”) Younger respondents, in contrast, provided vague words (e.g., “good,” “great,” and “cool.”)

Gender differences are striking. Younger men reflected ambiguity with words ranging from “nice” to more dour terms such as “death.” By comparison, younger women were more optimistic and goal-oriented, providing such words as “happy,” “accomplished,” “fulfilled,” “success” and “complete.”

Many of the words favored by older men reflect familiar images of retirement. They used words like “hobbies,” “travel” and “relax.” In contrast, some of the most popular words among older women were “peace,” “calm” and “time”—perhaps reflecting that women, beginning in midlife, often serve as the primary caregiver for children and elderly parents while shouldering careers.

We were also struck, as noted, by how a relative few words dominated the respondents’ thoughts about life after a career—a period that often covers a full one-third of adult life. One possible explanation for this is that people’s visions of retirement are channeled by the way retirement is portrayed in the media and the financial-services industry: as an older man’s view of life after work, often reflecting trite commercial images of endless beach walks and golf.

Whatever the reasons may be, taken as a whole, the words respondents offered show there is not a clear vision of life after work. The ambiguities and often trite visions suggested by the words may themselves represent a barrier to saving and planning for life after a career ends. Retirement is likely to be the most expensive item any family will purchase. Yet, unlike anything else in life, it remains an elusive vision rather than a tangible product or experience that can be tasted, worn, driven or lived in.

Dr. Coughlin is the founder and director of the Massachusetts Institute of Technology AgeLab, a research group focused on the challenges of aging. Follow him on Twitter @josephcoughlin. Dr. Lee is a research scientist at MIT AgeLab. They can both be reached at reports@wsj.com.